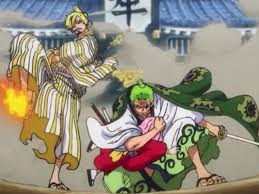 Luffy’s Determination – Win Through the Sumo Inferno! » is the 943rd episode of the One Piece anime

Zoro clashes with Kyoshiro and Sanji clashes with X Drake while Usopp takes Toko to safety. The Orochi Oniwabanshu arrives to confront the Straw Hat Pirates.

Law arrives at the Rasetsu Town prison to rescue his captured crewmates, but he is confronted by Hawkins.

Back at Udon, Queen subjects Kid and Killer to water torture as he resumes the Sumo Inferno. However, Big Mom arrives at the Prisoner Mines.

The following are extended:

Hawkin’s extra dialogue after he reveals to Law that he used his powers on Shachi, Penguin, and Bepo.

When Hawkins is demonstrating his powers to Law in the manga, there were other prisoners with Shachi and Penguin.

When Zoro rescues Hiyori, he cuts Raijin in the manga. In the anime, Zoro only pushes Raijin away.

When Luffy tells Queen that Kid has nothing to do with him, Queen was doing one of his dances in the manga. 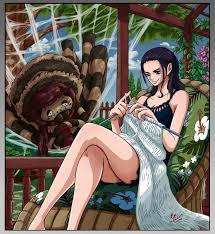